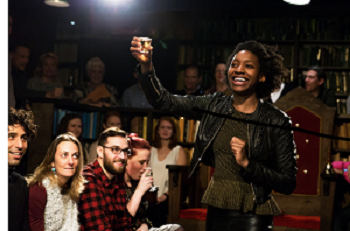 Created by Scott Griffin and David Hudson and directed by Hudson and Lisa Klages, Drunk Shakespeare is a New York Times’ Critic’s Pick and “the best thing to happen to the theater,” according to Slate Magazine. It begins with one actor drinking five shots of liquor before attempting to lead the cast through a Shakespeare play.

The show will be performed at The Rose Theatre, a new pop-up venue with a hidden entrance off the valet parking, here at Arizona Center. The theater will feature a library speakeasy with 10,000 books and craft cocktails served throughout each performance.

“The Drunk Shakespeare Society” has been meeting, drinking and performing Shakespeare for over a thousand nights and over a thousand liters of liquor. This talented troupe of rotating members share the epic poetry of William Shakespeare, but you don’t need to be a fan of Shakespeare to enjoy yourself. Pop culture references, improvisation, audience games, a wealth of surprises and liberal departures from the text (with outrageous consequences) make this fun for everyone. Every night and every performance is different, you never know what will happen.

For more information or to purchase tickets visit www.drunkshakespeare.com

Host An Event at Arizona Center